You are here: Home / Book / Ashamed of the Gospel / John MacArthur Tells Christians: Don’t Fornicate With The World 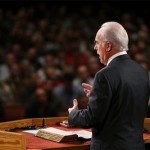 Speaking from the pulpit to thousands of fellow pastors at the Shepherds’ Conference, MacArthur underscored the biblical command not to be yoked with nonbelievers and to be a separated people.

“Paul demands a total break,” he said Wednesday at Grace Community Church in Sun Valley, Calif., citing the apostle in the New Testament.

MacArthur, author of Ashamed of the Gospel: When the Church Becomes Like the World?, grew up in a fundamentalist environment. At that time, the word “separation” was a big word on the evangelical word list. Fundamentalists built high walls in terms of church conduct and relationships, he explained. If those walls or lines were crossed, the violator was vilified.

Even MacArthur was a victim of the highly separatistic fundamentalism. He recalled being stripped off of about 55 radio stations in one day when they felt he was behaving outside their parameters.

The fundamentalism back then was cruel and unbiblical, he said. And it was so cannibalistic that it consumed itself and disappeared.

But MacArthur feels there needs to be a “biblical (not traditional) understanding of separation” among Christians today.

“I think we are very much aware of the fact that there is a distinction between being a Christian and being a non-Christian,” he said. “I don’t think much of evangelicalism understands that. I think the line between a true Christian and a false Christian is significantly blurred.”

As Apostle Paul made clear to the Corinthians, MacArthur noted, Christians cannot live in both worlds – the world of righteousness and the world of unrighteousness, light and darkness, Christ and Satan.

Two millennia ago there were believers who blended Christianity and paganism with the intent of trying to make Christians more palatable and popular and less narrow, offensive and exclusive. It’s the same picture today as churches “import all the styles of the culture into the holy life of the church,” MacArthur lamented.

Such blending simply validates the culture and confuses the church, he pointed out.

“There’s so many of these, whatever they are, they’re not churches. They’re events on a Sunday with a standup speaker who’s got charisma. They don’t understand the church,” he said. “I’m not against evangelism but don’t call it a church.”

A church, he defined, is a group of people who have come to Christ and separated themselves from Satan’s system. It’s a redeemed community of believers, he added, and not an event open “to anybody and everybody where you accommodate the world at the expense of the spiritual life and maturity of the church.”

“You can’t marry the church to the culture,” he said. “Don’t fornicate with the world.”

Separating from the culture and from nonbelievers does not mean isolating oneself, MacArthur made clear. When Paul called for a clean break he did not say to avoid nonbelievers or to not share the gospel with them.

Rather, he called the church to be “an absolutely separate entity from anything that defines or describes the belief system or the behavior of the society,” the popular author stressed.

MacArthur went on to denounce interfaith or multifaith efforts.

“The issue here specifically relates to harnessing believers and unbelievers in any common religious spiritual enterprise,” he explained. “True Christians have to separate from all of that … all matters related to ministry, related to Scripture, related to doctrine and related to worship, right?

“Those who do not confess Christ truly, do not affirm the true Gospel have no place participating in any enterprise that intends to advance God’s purpose and God’s kingdom in the world.”

At the end of his hour-long message, MacArthur explained to pastors that he simply wants to be obedient to God’s word and enjoy His favor.

“I’m not by nature this narrow-minded kind of separatist who wants to chew up and spit out everybody who crosses the lines that I draw,” he said. “But I just want above all things in my life to obey the Word of God.”

“How ungrateful would I be to the God who has taken up residence in me … and in His church … and who has literally poured out endless promises to flagrantly disobey?” he noted.

“He called you to Himself. …What do you owe in return? You owe obedience to Him and honor.”

The Shepherds’ Conference kicked off on Wednesday, March 3, and will continue through to Sunday, March 7, 2010.