JERUSALEM – Two parts of an ancient biblical manuscript separated across centuries and continents were reunited for the first time in a joint display Friday, thanks to an accidental discovery that is helping illuminate a dark period in the history of the Hebrew Bible. 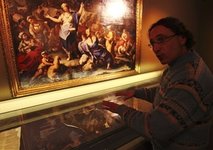 The 1,300-year-old fragments, which are among only a handful of Hebrew biblical manuscripts known to have survived the era in which they were written, existed separately and with their relationship unknown, until a news photograph of one’s public unveiling in 2007 caught the attention of the scholars who would eventually link them.

Together, they make up the text of the Song of the Sea, sung by jubilant Israelites after fleeing slavery in Egypt and witnessing the destruction of the pharaoh’s armies in the Red Sea.

“The enemy said: ‘I will pursue, I will overtake, I will divide the spoil. My lust shall be satisfied upon them, I will draw my sword, my hand shall destroy them,'” reads the song, which appears in the Book of Exodus. “Thou didst blow thy wind, the sea covered them. They sank like lead in the mighty waters.”

An exhibit at Israel’s national museum dedicated to the Song of the Sea is now bringing together the two long-separated pieces.

One page of the song, known as the Ashkar manuscript, was previously housed in a rare books library at Duke University in North Carolina and was first displayed at the Israel Museum in Jerusalem in 2007.

That’s when a photograph of the manuscript in a local newspaper caught the eye of two Israeli paleographers, Mordechay Mishor and Edna Engel, who noticed it resembled a different page of Hebrew writing known as the London manuscript, presently part of the private collection of Stephan Loewentheil of New York.

“The uniformity of the letters, the structure of the text, and the techniques used by the scribe … it made it very clear to me,” Engel said.

The relationship would not be so clear to a casual observer. The Ashkar manuscript has been so blackened by exposure to the elements that the text is all but invisible, while the London manuscript is legible and far better preserved. But after close study of ultraviolet images, the experts were able to confirm that the texts were not only written by the same scribe, but were also part of the same scroll.

Scholars believe the scroll was written around the seventh century somewhere in the Middle East, possibly in Egypt. It is not known how the two parts were separated or what happened to the rest of the manuscript.

The museum arranged to have the London manuscript brought to Jerusalem. The new exhibit chronicles how the Song of the Sea was written through various ancient manuscripts, from the 2,000-year-old Dead Sea Scrolls to the manuscript known as the Aleppo Codex, written nearly a millennium later.