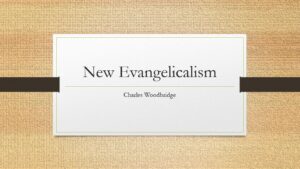 New Evangelicalism. Now what is this exactly? It is a spirit of compromise with unbelievers.

Through the years we have all become influenced by Billy Graham. One way or another he has, for us, been the spokesman for evangelical Christianity. He has become the symbol of gospel preachers to the world and even to the church. He, more than anyone else, has influenced evangelicalism through his preaching, through his cooperative […]