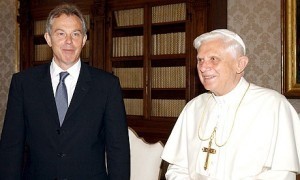 Tony Blair has given a fascinating interview to the BBC about two subjects dear to his heart. One of these is well known: the Catholic Church. The other is less well known: it is Francis Campbell, the British ambassador to the Vatican who was one of Blair’s favourite officials in Downing Street.

The former prime minister, who is planning to expand his faith organisation across the US, recalls his incredulous response when officials told him that it would not be possible to appoint Campbell as ambassador to the Holy See because he is, er, a Catholic.

Campbell, 39, is from Northern Ireland and worked as Blair’s private secretary between 2001-03 before leaving to work as a diplomat and then for Amnesty International after feeling uncomfortable about the Iraq war. He was appointed ambassador to the Vatican in 2005 after an open competition.

The former prime minister’s affectionate interview about the ambassador, who helped organise Blair’s family visit to Pope John Paul II, at around the time of the Iraq war, reflects the deep respect and warmth towards Campbell in Downing Street.

So there we have it. Catholic Emancipation – 1829. First Catholic British ambassador to the Vatican – 2005. Next stop? Lifting the ban on Catholics in the line of succession.