A LONDON Church was effectively ‘silenced’ by a Court after a decision by Magistrates to uphold a noise abatement notice, not to play excessive sound, after just one Muslim neighbour complained about noise levels of worship in a church which was next door to the house he purchased. Singing songs of praise on a Sunday […]

Tony Blair Faith Foundation news update courtesy of  Ruth Gledhill of Times Online … ‘Each was made to feel an outsider. Each stood out against the conventional teaching of the time. Each believed in the universal appeal of God to humanity. Each was a change-maker.’ Who is Tony Blair talking about here? Answer below. Read […]

Tony Blair tells the Pope you are wrong – speaking to the gay magazine Attitude, the former Prime Minister, himself now a Roman Catholic, said that he wanted to urge religious figures everywhere to reinterpret their religious texts to see them as metaphorical, not literal, and suggested that in time this would make all religious […]

John MacArthur The tendency to venerate tradition is very strong in religion. The world is filled with religions that have been following set traditions for hundreds–even thousands–of years. Cultures come and go, but religious tradition shows an amazing continuity. In fact, many ancient religions–including Druidism, Native American religions, and several of the oriental cults–eschewed written […] 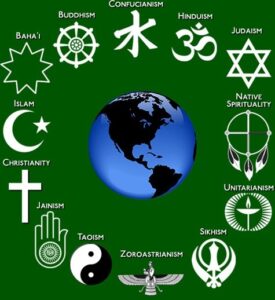